The Border Crisis is a problem that Central America cannot solve: a view from Guatemala

The American border has completely collapsed, and it is a threat to U.S. national security. But you would not know it from the White House.

By all credible accounts, the U.S. government (USG) confronts an illegal immigration crisis of galactic dimensions, and it is of its own making. (here, here, and here) For starters, the USG cannot even bring itself to call it illegal immigration.

On the campaign trail, candidate Biden declared that the U.S. could accept many more migrants and refugees, to the tune of millions. In the first days of his presidency, Biden reversed Donald Trump´s application of standing U.S. laws on migration. Biden´s changes in U.S. migration policy have had shocking effects.

USG seizures of fentanyl at the southern border have risen dramatically, according to NBC News. This data must not be interpreted as evidence of greater USG efficiency in illegal drug captures on our border. The latest data for 2022 show that Fentanyl is now the number one killer of American adults in the 18 to 45 age range. In 2021, the U.S. suffered more fentanyl-related deaths than gun- and auto-related deaths combined. American deaths from fentanyl are directly tied to the crisis at the U.S. southern border, and the Biden administration´s willful failure to even admit there is a crisis, much less take steps to solve it.

Since Biden took office in January of 2021, approximately 5 million illegal immigrants have been encountered on U.S. borders. This is larger than the population of 15 states in the U.S. Some 98 persons on the Terrorist Watch List were detained in fiscal year 2022 alone. Remember that the next time you have to take your shoes off at the airport.

There is now a qualitative difference in how illegal immigrants deal with U.S. immigration authorities. Whereas before illegal immigrants tried to avoid U.S. immigration authorities, they now eagerly seek them out. They do so with the knowledge that they will not be deported. Economic migrants are being treated as refugees. This is an abuse of the international political asylum system, as even Fareed Zakaria of CNN has admitted.

Regarding point 1, economic insecurity certainly could fuel migration fuels, but it is hard to see how economic inequality would do so.  Economic inequality per se does not cause hunger and hardship. In fact, Costa Rica has greatly reduced her poverty rates, even as her inequality has increased, and this country poses no illegal immigration problem for the U.S.

More to the point, the differential in living standards between the U.S., Mexico and Central America has either not grown at all in recent years, or at the levels that would be necessary to explain the literal explosion of detentions at the U.S. Southern Border. The differentials between U.S. G.D.P. per capita and that of the countries of Mexico and Central America have remained relatively constant. Mexico has declined, but so have the border detentions of Mexican nationals, relative to the total.

Regarding point 2, corruption is, in fact, a constant in the region and certainly no help in fomenting economic growth. Guatemala is no exception. Her scores on Control of Corruption, according to the World Bank, have, indeed, worsened in the last decade, but not in sufficient degree to explain the literal explosion of border detentions. In fact, Guatemala´s share of total border detentions at the U.S. Southern Border has declined in the last few years, a time period where the government of Guatemala took active steps to enforce international law on refugees and human trafficking, even as her scores on Control of Corruption have declined, according to latest World Bank data. Guatemala, arguably, has done more to control human trafficking and illegal immigration than the USG. (here, here, here) No wonder, then, that the Guatemalan president last year openly blamed Joe Biden for the border crisis.

The other two aspects of point 3, human rights and free press, are also not free of political propaganda by the U.S. State Department (DOS) and its aligned media outlets. According to Reporters Without Borders, the Press Freedom Index report for Guatemala declined from 61.55 in 2021 to 47.94 in 2022. Recently, a Guatemalan media mouthpiece allied with the USG had to shut down its print media operation, for lack of advertisement by the private sector. It should be noted, however, that the government of Guatemala has taken no formal steps to curtail freedom of the press.

Regarding point 4, violence, the data does not support the USG narrative on illegal immigration. According to the latest data from the World Bank, homicides are trending down in most countries in , except Panama, Mexico and Nicaragua. This particularly applies to Guatemala, where the trend is clearly downward since 2009. Cuba and Venezuela, of course, do not report timely or trustworthy data. If anything, the preliminary data on homicidal violence should support a focus on Cuba, Venezuela and Nicaragua, not Mexico or the Northern Triangle countries.

Regarding point 5, violence against women as an explanatory factor behind the explosion of illegal migration into the U.S. from countries in Central and Latin America must also be questioned. World Bank data consistently shows that the intentional homicide rate is between 2.8 and 16.7 times higher for males than females, in the countries under review. As is the case everywhere in the world, violence is perpetrated on men, by men. A deep-dive into the 2022 data, segmented by the 2 genders, will be quite useful, when this date becomes available.

In short, the famous Push Factors of illegal immigration into the U.S. are not the cause of the border crisis. The only other logical conclusion is that the failure of the USG to apply standing U.S. migration law is what, in fact, explains the current invasion of illegal immigrants arriving at the U.S. Southern Border.

In light of the facts, the Biden Administration should not hold foreign governments, like Guatemala´s, to account for its own [impeachable] failures to apply standing American law.

Protecting American borders is a task that cannot be outsourced to other countries. If our own government refuses to comply with its sworn duties, it only loses credibility when it passes the buck to other foreign governments. The Guatemalan president was right. It is Biden´s fault. 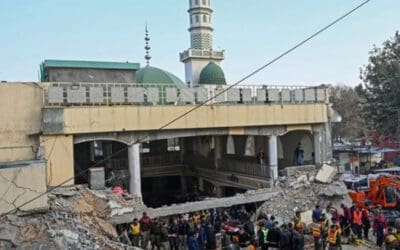